The mass murder that anti-capitalist, socialist states have engaged in since the days of Lenin pose a much greater threat to ethics than profit making. Since the anti-profit, socialist mentality has turned out to result in serial mass murder (China, Russia, Cuba, North Korea, Nazi Germany), the anti-profit camp needs to address its own moral bankruptcy. That opponents of profit making are in charge of and predominant in education, including in business schools, has led to a confusion between ethics and opposition to capitalism. Since opposition to capitalism has resulted in the world's worst crimes, and universities have led the opposition, universities have created a moral vacuum. Positivism reflects this vacuum. An example is finance theory, which holds that meaningful action is impossible because the market already anticipates all knowledge (rational expectations). For a good description of the workings of socialism in the Nazi (National Socialist) regime in Germany, see Gunter Reiman's Vampire Economy. Because universities are still wedded to primitive, 20th century opposition to profit, they induce bad ethics.
Posted by Mitchell Langbert at 6:50 PM 1 comment:

A colleague from a public, western university told me that for an economics final exam he asked an exam question that required basic arithmetic. Unable to do the arithmetic, a student wrote in the allotted answer space: "Millennials don't do math."  Another colleague from an East Coast community college wrote this in a recent email:

Unfortunately, the whole enterprise has become a mockery. At my community college this semester, over 85% of our entering freshmen need math remediation -- that's 85 percent! Many do not know the multiuplication tables!

I recently met a philanthropist who told me that she thinks it's a waste of money for students who are unable to do college level work  to attend college. Even the mouthpiece of Progressivism, The New York Times, admits that the majority of high school seniors are not college ready:


In New York City, 21 percent of the students who started high school in 2006 graduated last year with high enough scores on state math and English tests to be deemed ready for higher education or well-paying careers. In Rochester, it was 6 percent; in Yonkers, 14.5 percent.

The new calculations, part of a statewide push to realign standards with college readiness, also underscored a racial achievement gap: 13 percent of black students and 15 percent of Hispanic students statewide were deemed college-ready after four years of high school, compared with 51 percent of white graduates and 56 percent of Asian-Americans.

The situtation is just as bleak with respect to performance in college.  According to The Chicago Tribune:
Arum, of New York University, and Roksa, of the University of Virginia, startled the academic world with their finding that 36 percent of students made no significant learning gains in critical thinking and communication skills from their freshman to senior years.

That tends to confirm what reader Jerre Levy, a retired University of Chicago professor of psychology, wrote: 'I wish with all my heart that a college degree implied that the person holding that degree was capable of critical thinking. However, this is, sadly, not true.'


According to Sandra Stosky and Ze'ev Wurman in Minding the Campus:

Estimates of those needing remedial classes before taking credit courses range from 30% of entering students to 40% of traditional undergraduates. According to a 2008 report by the CUNY Council of Math Chairs, 90% of 200 City University of New York students tested couldn't solve a simple algebra problem in their first class at a four-year college.

Except for the top 10 percent of students, college spending misallocates wealth.  There is no evidence that increased college attendance makes economies more productive.  America was a more innovative country when less than five percent of its population attended college.  For instance, Thomas Edison had three months of schooling. In 2012 66.2 percent of high school seniors enrolled in college.

Despite the absence of gains in academic achievement since 1970, K-12 education has, since 1970, tripled in inflation-adjusted cost.  I copied the following chart from Intellectual Takeout.org, which got it from the Cato Institute: 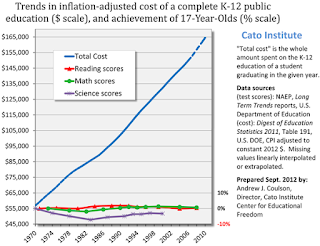 There also has been a higher education cost increase.  According to the American Enterprise Institute's Douglas N. Harris:

Since the early 1990s, real expenditures on higher education have grown by more than 25 percent, now amounting to 2.9 percent of US gross domestic product (GDP)—greater than the percentage of GDP spent on higher education in almost any of the other developed countries.  But while the proportion of high-school graduates going on to college has risen dramatically, the percentage of entering college students finishing a bachelor’s degree has at best increased only slightly or, at worst, has declined.

I disagree with Harris that the flunkout rate indicates a productivity gap.  Colleges that make their courses easier graduate more students, but the result is not higher productivity.  Rather, attendance of students who cannot graduate at the current watered down level diverts resources from more productive uses.

There is no evidence that college increases the ability to think coherently, to come up with creative solutions to human needs, to become a better citizen, or to become more productive economically.

On the other hand, there is evidence that colleges are politically biased and that they serve to indoctrinate students in left-wing, Progressive,  and big-government ideology.  Although college degrees in fields like engineering, business, and health raise salaries, there is no evidence that a more targeted or online education cannot equally prepare students for careers in those fields.  A large share of the Forbes 400, for instance, does not have a college degree, and that is especially true of the self-made portion that has engaged in areas other than finance.

Research that shows that college education contributes to human capital is tautological and does not control for alternative explanations.  It observes increases in pay from college, then it concludes that the pay is a return to human capital.  One alternative explanation is signaling: The college degree signals personal and intellectual abilities, but its content may be irrelevant to the job.  In that case an IQ test combined with four years in the military or the Peace Corps could be used in its place--and those might more accurate measures. Another explanation is that firms find college to be an easy way to screen job applicants: It is cheap to employers because the job applicants pay; parents are eager to see their children have prestigious or professional careers, and they are willing to foot the bill.

On their part colleges and their faculties function as special interest groups, pushing for ever greater subsidies, expansion of programs, and licensure requirements in fields like medicine and law. Licensure requirements force the public to subsidize higher education.   Moreover, colleges have succeeded in gaining tax exempt status despite their routine violation of the Section 501 (c) (3) requirement that tax exempt organizations not engage in political indoctrination.  Universities, especially in the social sciences, humanities, and bogus sciences like environmental studies, routinely engage in political propagandizing, and they do so unabashedly.

There is an additional explanation for the higher education bubble:  Federal Reserve Bank counterfeit money that has been allocated to student loans. Without student loans the growth in the number of students attending college, hence wasting public resources and being indoctrinated in Progressive ideology, would be much smaller.  Conversely, firms would not be able to require irrelevant college degrees in fields like retail.  College can be viewed as a Fed-generated economic bubble, much like the tech bubble, the Internet bubble, and the sub-prime housing bubble.

Posted by Mitchell Langbert at 3:28 PM No comments: