Based on the correlation between G3 central bank balance sheets and stock prices, Smith  writes that the rising stock market has had had little to do with free markets but rather is the product of central bank asset purchases.  When the central bank sells assets, stock prices will reverse.

The G3 are the US, Japan, and Europe.

Smith claims that currently fashionable stock buybacks are the last gasp of paper money stimulus.  The trade war, in Smith’s view, is a mere distraction. 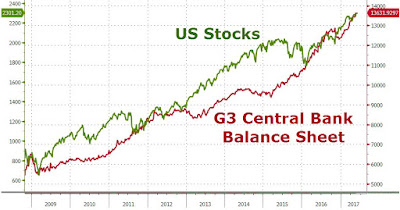 Central bankers and their shills in the media and academia claim that reducing asset holdings will not matter because so much assets have been purchased.  It is kind of like Bill Gates giving to charity: He is still very rich even after giving away a lot.  The Establishment claims that contraction can be done gradually and in the Goldilocks manner--just right.

At the same time, additional regulation, including tariffs, can reduce the potency of the narcotic of flexible money by making firms less profitable, i.e., reducing efficiency.   Once a given regulatory system is in place, monetary policy will drive the stock market, but if there is disruption, then there can be sharp change. If the disruption occurs in tandem with monetary contraction, then it seems likely that it can contribute to declines.

Smith is right that monetary contraction will threaten the stock market; adding tariffs to the mix can contribute, but it is not the underlying factor.

Jim Rickards has been writing about central bank policy for a long time, but he puts greater emphasis on the tariffs.  He cites Patrick Donahue and Arne Delfs of Bloomberg news, who have written a piece about a warning by German chancellor Angela Merkel of a potential global financial crisis because of the tariffs.

The Establishment is always careful not to question  central banks, for the state depends on wealth extraction from the productive population using paper money.  In this way both the financial sector and the state are aligned with the central banks. The general population believes the claims of the media and universities that big government is necessary to its well being and low wages are necessary to their happiness--except when the subject of income inequality is raised; then,low wages are a problem that requires bigger government.

Hence, Rickards's comments are compatible with Smith’s claim.  Smith's claim that news about tariffs is coordinated with central bank policy is impossible to substantiate, but the underlying elements are present.

While stock markets decline because of monetary contraction, tapering, or deleveraging (choose your mumbo jumbo) and contraction saddens Wall Street, the average American has been hurt financially by the long-term, century-long monetary monetary expansion. It has led to declines in innovation rates and the real hourly wage. It also has led to expanding income inequality.

Posted by Mitchell Langbert at 8:29 AM No comments:

Slavery Was Irrelevant to the Creation of the Electoral College

I was just reading Max Farrand's (1913)  Framing of the Constitution of the United States (Palladium Press reprint, 2000) in order to get a sense of the basis of the claim that I have seen in various newspapers that the creation of the Electoral College in the Constitutional Convention of 1787 was somehow relevant to slavery.  There is no basis for this claim. It is fiction, fake news, bunkum, or whatever you wish to call it.  (For an example of the bunkum, see this, which erroneously claims that the three-fifths rule was important to the Constitutional debate and also erroneously seems to claim that the free populations of states like Virginia and North Carolina were smaller rather than larger than Northern states like New Jersey and Rhode Island.)

Wikipedia lists the states by 1790 population, and the eight states with the fewest free white males were Delaware, Georgia, Kentucky, Rhode Island, Vermont Maine, South Carolina, and New Hampshire--half Northern, half Southern.  However, the debate at the Convention and the use of the terms "small states" and "large states" didn't exactly follow the population numbers.

Farrand's book is eminently readable and held my attention for about 200 pages.  His answer is clear: Slavery was irrelevant to the great compromise and the creation of the Electoral College.  He notes that, with respect to the great compromise--concerning the assignment of two senators per state and proportional representation for the House, to appease the large states--there had been fallacious speculation by historians in the 19th century concerning a role for the slavery issue, but  it was not at issue.

The famous three-fifths rule had already been in effect under the Articles of Confederation, and much of the Constitution was taken from the Articles as well as other preexisting state constitutions, especially that of New York.  When I had first read New York's constitution several years ago for the first time, I had supposed that the state had copied the federal Constitution, but it was the other way around.

In sum, in the 1787 Constitutional Convention there was little discussion about the existing three-fifths rule, and it was irrelevant to the great compromise and the Electoral College.

The small state-versus-large-state dispute had its roots in the small states' fear of absorption by the largest states.  The three largest  states in order of increasing size were Massachusetts, Pennsylvania,  and Virginia.  The large states had claims to Western lands, and those claims distinguished them from the smaller states.  Although Georgia was a small state in population, it too thought it might have claims on Western lands, so it voted with the large states.

The smaller states included New Jersey, New York, Connecticut, Delaware, and Maryland.  New Hampshire and Rhode Island were missing from the convention debate, but they would have been in the small-state category. Delaware and Maryland were relatively slave states.

Hence, slavery was not much discussed in the Constitutional debate.  At one point Madison raised the point that the North-South divide was more important than the small-state-large-state divide, but the delegates were concerned with the latter, not the former.   The small-state-large-state debate was important with respect to the compromise concerning proportional representation of the House and fixed representation in the Senate. It was also relevant to the creation of the Electoral College.

The original plan for the Electoral College was that the electors of each state would vote for two people, one of whom could not be an inhabitant of that state.  The person having a majority of votes would win, but if there was no majority, the decision would be made in the Senate. In the final version the House rather than the Senate was to break ties.

Virtually no one in the Constitutional Convention believed in popular, direct election of the president.   Instead, the electors would have independent thought in their vote.  Farrand writes:

It was expected that the electors would naturally vote for men from their own state...each elector was expected to vote independently according to his own judgment...it was expected that the vote would be so scattered as to not give a majority to any one person. This would throw the election to the Senate.  In other words, and it was so explained again and again, and by such men as Madison, Sherman, King, and Gouverneur Morris, under this system the large states would nominate the candidates and the eventual election would be controlled by the small states

The convention acted on the assumption that this would happen in the great majority of cases. 'Nineteen times in twenty,' Mason asserted in the federal convention, and a little later in the Virginia state convention he claimed forty-nine times out of fifty--the vote of the electors would NOT be decisive.

In other words, they thought the Senate would control the election of president.  Farrand adds, " It is quite possible here, as in so many other questions, the large states accomplished their purpose under a veil of concession."  The use of the House rather than the Senate was accepted without much debate.

The issue of slavery had as little to do with the creation of the Electoral College as did the price of tea in China.
Posted by Mitchell Langbert at 1:49 AM No comments:

In Case You Had Any Doubt 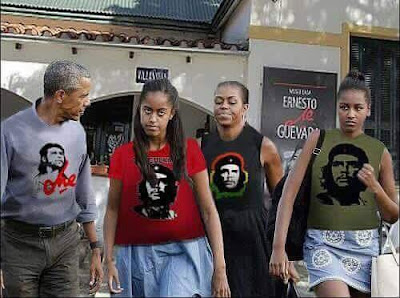 The photo is doctored, but it is more honest than any previous Obama photo op.

Posted by Mitchell Langbert at 4:04 PM No comments:

King Kong versus Godzilla: US and Chinese Central Banks Go to War over Trade

Tariffs are a mistaken policy---unless you find a trading partner who's even dumber than you are and is willing to foot the bill for you. President Trump may have done that. The strengthening dollar suggests a deflationary effect of the tariffs arising from Chinese dollar purchases. The dollar gets stronger, Americans can buy more; the yuan renminbi gets weaker, the Chinese can buy less but sell more. American goods will be harder to sell, but Americans will be richer and have more money to spend. If this pattern continues, some of the effects of Fed monetary policy--reduced interest rates--will be counteracted. The stock market may be in for a roller coaster as Chinese and Fed manipulation--King Kong versus Godzilla--battle it out. Americans may at least temporarily benefit. In the long term, we would have been much better off without the manipulation, without the Fed, and with a market-based system free of central bankers and Wall Street subsidization.

I have temporarily reduced my gold holdings on the chance that dollar strengthening continues and gold continues to fall. A few days ago $1240 was a technical resistance point. Gold is now down to $1217, and it looks like the drop will continue.  I suspect that the collapse in the commodity sector will continue down to the point where the Chinese stop subsidizing the dollar, probably when the dollar rises another five to ten percent.
Posted by Mitchell Langbert at 1:47 PM No comments:

Glenda R. McGee sent me this video of a former left-wing academic who has left the Democratic Party because of the political correctness and anti-Trump movements. She says that her former friends have stopped talking to her simply because she now questions identity politics.

She has noticed that Democrats are not nice, moral people; hence, she has reached a familiar conservative conclusion: If you expand government power, you might find out that you don't like the Democrats who have assumed  that power.

One point I have to add: For an academic, she's not bad looking, and this seems to be a trend. The good-looking people are leaving the Democratic Party, which is increasingly becoming a party of ugly people.
Posted by Mitchell Langbert at 10:39 PM No comments: