Controlling for IQ, Does Higher Education Send a Negative Signal?

In validation studies, when controlled for IQ, years of education have a dampening effect on employee performance criteria, such as supervisory ratings.  What has occurred with American colleges in recent years--the dumbing down of and politicization of the social sciences and humanities, the increasing emphasis on identity politics, claims of microaggessions, demands for safety blankets and safe spaces, student violence, Antifa, and the linkage of higher education with terrorism--may be increasingly offsetting the traditional signaling value of higher education. College degrees may be a worse predictor of job performance and a worse signal to employers than a two dollar IQ test.  Employers may be beginning to favor high-IQ job applicants without college degrees to applicants with degrees, especially if the degrees are in politicized fields like gender studies.

One of the chief impediments to understanding the effects of education is the traditional research approach of combining all majors into a single variable called "education." In fact, gender studies education has zero to do with mathematics education.  One is political, the other is intellectually demanding.  Saying that students who have been exposed to four years of gender studies education have had an experience equal to students who have studied mathematics or engineering is incorrect.

I gave the following extra credit assignment to my classes.  I wonder whether Antifa, dumbed-down studies majors at universities around the country, Antifa's dumbed-down studies professors, and the dumbed-down New York news media will demand that I be fired for saying that socialism doesn't work.

Dear Class:
At the beginning of the term, I said that you can raise your exam grade by five points by doing an optional extra credit assignment. The assignment requires that you read Friedrich von Hayek's article "The Use of Knowledge in Society" (available  here) and write a one- to two- page paper that develops a thesis about the article.  Your thesis can be pro or con.   You will need to read the paper thoroughly.   Adding additional readings is fine but not required.
The paper needs to be one to two pages, double spaced, with 12-inch font, and with one-inch margins.  Your name and class section should be in the heading.  It needs to be emailed to me by December 16 because I will be submitting the final grades soon thereafter.
The background for Hayek's article is as follows:  In the 1920s Ludwig von Mises showed that socialist economic planning is necessarily inefficient because its information requirements are too great.  Later, Oskar Lange attempted to refute von Mises by claiming that firms can use survey data to equate economic marginal cost and revenue, so duplicating free markets.  However, Lange's claim that perfect competition can be duplicated with managerial survey techniques begs von Mises's original question.
First, the burden of performing such surveys and coordinating them around the economy is too big and causes decision making to be too slow to be of any use. Second, even if such surveys are performed, a socialist economy--characterized by centralized planning, regulation, or control--violates a key premise of competition: ease of entry.  Since there is no quality competition, closed socialist economies are doomed to produce low-quality merchandise.  Moreover, because the central planning agency (Gosplan in the former USSR) cannot digest all of the information needed to coordinate a large economy, there will be inefficiencies.
In "The Use of Knowledge in Society" Hayek provides an additional reason why socialism cannot work.  The most important knowledge in running a business is not theory. It is knowledge of specific time and place, practical coordination.  In order to coordinate economic decisions, an economic communication system is necessary. Although great advances have been made with respect to information technology since Hayek's article was published in the 1940s, the Internet, smart phones, and similar information technologies don't come close to being able to coordinate the massive, rapid fluctuations in information that must be communicated to entrepreneurs.  Only a free market PRICE system is capable of communicating such information rapidly.  Since socialism squashes, eliminates, or at a minimum distorts PRICES, information becomes garbled or disappears, and inefficiencies, shortages, and distortions occur.
Von Mises and Hayek's ideas were transferred to smaller organization units by James March and Herbert Simon in their classic book on organization theory, Organizations.   March and Simon show that bounded rationality,--limits on the ability to plan--characterize business corporations, which are much smaller units than total states.  The information requirements to manage a state are orders of magnitude greater than the information requirements to manage a large corporation.

Hence, the increasing trend toward socialism over the past sixty years in the United States has caused the real hourly wage to stagnate and has eliminated economic opportunities for millennials. Astonishingly, millennials now mostly support socialism, essentially favoring the system that has restricted their opportunities and likely reduced their lifetime incomes.
The empirical evidence for the ideas of von Mises and Hayek, written in the 1920s to 1940s, supports their theories.  First, the Soviet Union fell in the 1980s for the reasons von Mises predicted in the 1920s. Second, large socialist countries like India and pre-reform China performed dismally. Third, countries that were largely democratic socialist in the 1960s, such as Denmark and Sweden, reformed their economies to eliminate much socialism because socialism performed badly there, even in smaller countries with smaller information demands than in large countries like the US or the USSR.  Denmark is now roughly as free market as the United States, and Sweden is almost as free market.
Although scientific evidence overwhelmingly favors the failure of socialism, you probably have not been exposed to the ideas of von Mises and Hayek in your education or in the media.  The economic forces that favor socialism are the same that favored the large-scale bailouts of 2008-9.  To understand how special interests work (and make no mistake, your education has been the product of special interests), you need to understand public choice theory.  A good place to start is with Mancur Olson's Rise and Decline of Nations.  However, for this assignment you will need to focus on Hayek's essay.
Sincerely,
Posted by Mitchell Langbert at 5:14 PM No comments: 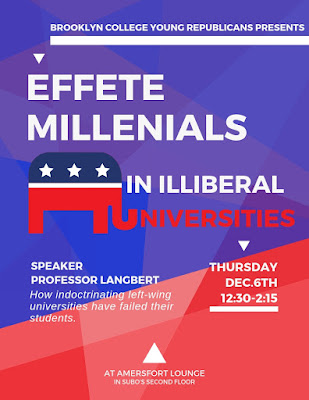 Posted by Mitchell Langbert at 2:09 AM No comments: