The minimum wage presents one of many value choices that divide America.  That is nothing new, but because it is one of the few areas in which some states are exceeding the federal government's degree of coercion, its differential adoption across the states suggests a potential model for overhauling the American political system.  The country can be divided into a green half that favors coercion, equality, and the religions of Marx and Comte and a blue half that favors freedom, economic growth, and the religions of Jesus and Moses.

In the nineteenth century the economic divisions between North and South led to two major conflicts: the conflict over the Tariff of Abominations in the late 1820s and early 1830s, which nearly led to a civil war, and the Civil War, which was fought not about slavery but about its abolition in new territories, which meant more land for white, small-scale farmers from the North.

The party of big business and free soil, the Republican Party, was also the party of abolition. Although Lincoln was not elected on an abolitionist platform, and Lincoln was a racist who wanted to send African American slaves to Africa, the conflict between states' rights and national power became associated with racism. This unfortunate historical confluence played into the hands of the big business-oriented Whigs, who had become a cornerstone of the Republicans.  Lincoln, for instance, was a railroad lawyer and lobbyist who directly benefited from the transcontinental railroad, which he authorized.  As well, increasing national power played directly into the hands of a host of large corporate clients, especially Wall Street. Regulation, painted as anti-business, was a bulwark of the corporatization of the American economy.  Universities were bolstered not only to provide scientific support to large-scale industry but also to provide ideological justification for centralizing policies that support their architects and funders: the federal government, Wall Street, and big business.

Centralization has relentlessly proceeded even as it has become more costly. It was never clear that economies of scale minus centralization's costs provided net benefits, but the costs have relentlessly increased and the benefits relentlessly dwindled as social democratic and socialistic policies invented in the Northeast and especially in New York have been imposed on the rest of America.  The minimum wage is a case in point: It causes unemployment, and its expansion is likely to cause further unemployment.  The effects of increasing enforced unemployment in American ghettos are unknowable, but the Democratic Party is eager to impose such costs in order to further the needs of its clients, especially the Service Employees' International Union.

However, not all states are beholden to the SEIU.  In an article in Seeking Alpha Vlae Kershner produces the chart below. It shows the states that have adopted above-federal minimum wages and those that have not: 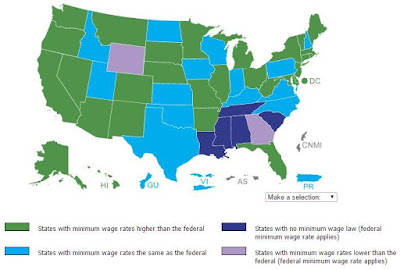 Kershner suggests that increasing the minimum wage will harm Wal-Mart and help Amazon, and my guess is that Amazon's management is in favor of the minimum wage.  The green states, those with a minimum wage higher than the federal one, have in a sense adopted a social democratic model. The ones who have not, the blue, purple and dark blue states, have  a more constrained ideology, which likely includes elements of belief in freedom.

The relationship is not one to one. Pennsylvania, for example, may not fall into the freedom-oriented category and Alaska or Florida may.  Perhaps, though, Prof. Angelo Codevilla's country party finds most life in the twenty-one blue, dark blue, and purple states.

This suggests a new model for American governance.  There is no reason why we need a single federal system of the size and scope of today's United States. Two, three, or four systems linked by common trade and military policies might be more efficient and result in a greater degree of experimentation than the increasingly suppressive federal government with its increasingly idiotic voters.  Switzerland, with 26 relatively independent cantons and Canada, with two different languages, outperform the United States economically, politically, and spiritually.
Posted by Mitchell Langbert at 1:53 PM No comments: