Town of Olive Homemaker Says No to Environmental Extremists 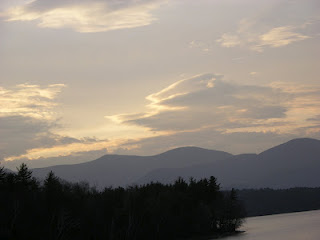 Glenda McGee, a 60-year-old homemaker, has taken a stand against radical environmental proposals put forward by a group that has proposed a scenic bypass plan for the New York Route 28 corridor. Led by Peter Manning, the group aims to complete New York City's century-long effort to grab land surrounding the Ashokan Reservoir and evict local residents at will.  The plan is couched in phony, radical environmental language, but it includes a proposal for a commercial bank friendly public housing project that would be destructive to the environment.  One might wonder why the town's elected officials would be eager to approve a plan that transfers zoning authority to a New York City-funded public-private partnership that has every reason to be antagonistic to the town's residents. The plan is proposed at the same time that Kingston, New York has proposed a stiff new inspection regime and has been doing walk-by inspections involving fining elderly homeowners in moderate-income neighborhoods for minor infractions.  The two-party system's attack on home ownership and private property is a concerted one.Those who have read up on UN Agenda 21 will not be surprised.

An Olive resident who mistakenly thought law suits to be confidential (you're in the Town of Olive, what do you expect?) asked me to serve the Town Supervisor with a law suit he brought himself related to objections to procedural and civil liberties implications of the same proposal.  I have been a process server a few times before,  and it's always fun to watch the defendant's expression--especially when he's a town supervisor. This is apparently the beginning of a series of law suits concerning the proposal and the fascistic, New York City-funded Catskill Watershed Commission.  I'm surprised that Timothy Cox, the Olive town justice who doubles as an officer of the commission, has yet to be investigated for conflicts of interest and violation of rules of judicial conduct.  I didn't think judges were supposed to function in a political capacity.

The Wrenching Transformation of Olive*

New York City Funds Their Vision for Land Use Control via the Scenic Byway Plan & the Draft Olive Comprehensive Plan.  In 1905, New York City annexed the best half of Olive – the rich bottom land - via eminent domain. Since that time, the rest of the annexation has been done incrementally and steadily via endless land purchases.

It appears that these two conjoined Plans were advanced to forge the legal weapons to achieve New York City’s annexation endgame. The Plans are craftily seeded with language that appears to lay the legal foundation for powerful weapons of land control and promote public housing development in the hamlets as well. The Plans are funded by New York City supported corporations, The Catskill Watershed Corporation (CWC) and the Catskill Center for Conservation & Development (CCC&D).

The Byway Plan is defined so broadly it covers the entire Catskill Corridor Regional Management of the Byway would be Administered by un-elected appointees acting as the Agent for 7 towns from Hurley to Andes.  Home Rule would be gutted: stripped of its zoning control – The NYS Court of Appeals has ruled that towns lose zoning control via the “Agency Act,” once an overarching regional agent such as the Adirondack Park Agency is established.  The Byway Plan seeks such Agency.

* Disclaimer: This is an opinion piece based on a massive citizen review of both plans, minutes from Plan meetings, presentations of the plans – and our layman’s interpretations of legal documents as the Town of Olive has hired no profession property rights attorney to review these Plans for our protection.

A “land use tool” called “transfer of development rights” would allow New York City to transfer its development rights from some portion of its 700,000 acres and sell them to developers for use in Olive’s hamlets. Supervisor Leifeld has already established an agreement with Ulster County designating Olive as a “high priority growth area.” That action allows Olive to participate in New York State’s fast track program for public housing approval. This was revealed in the Olive Comprehensive Plan and came as a shock to those of us who staked our real estate investment and decision to move to Olive based on its rural character. The Comp. Plan repeatedly states that it reflects the shared vision of the people of Olive, yet we have not spoken to anyone other than town employees or Planning Board members, who isn’t startled to learn that without a public hearing, a monumental change in our lifestyles and the value of our homes had been undertaken without general knowledge.

So it seems if these plans are approved, New York City can sell thousands of development rights to their pay to play friends with the connections necessary to participate in public/private housing partnerships. This would be a tremendous blow to the private housing builders and would require a disastrous environmental disruption. The Comp. Plan recommends massive infrastructure burdens on the taxpayers including extensive sidewalk and sewer projects.

New York City would reap a fortune from selling development rights, and we would be holding the bag of soaring school taxes and damaged real estate values.

But the biggest coup of all for New York City could be this: by installing a Byway Management Entity, NYC would no longer have to buy property to control it. They would no longer have to pay to displace people: A Byway zoning overlay could “coerce” people off their land for free via pressure from taxation and zoning burdens – and stop development everywhere & anywhere. We learned at the Shandaken Byway hearing last week that the State is already informing Business that the rules change if the Byway Plan is approved.

Without paying a penny, New York City could rule the Catskills in neo-feudalist fashion, and we would become the serfs carrying the tax burden.

If the Byway Plan goes forth, your perfectly legal house or business today could be in non conformance overnight. Last week in Shandaken, Scenic Byway Pitchman Peter Manning (paid by the CCC&D) denied Councilman Vincent Bernstein’s request to incorporate language within the document to protect property rights. In fact, without the grandfathering in of “all pre-existing, non conforming” uses of businesses, homes, signage, and all land use extant,” it seems anyone anywhere could be declared out of compliance.

The Byway Plan and the Draft Olive Comp Plan work hand in hand. Manning can deny that the Byway poses a problem in and of itself regarding a targeted issue, but in tandem with the Comprehensive Plan, a lethal assault on property rights can be forged.

Detached private homes are a major factor in causing Climate Change according to the legal authority referenced for guidance in the Byway Plan. This attorney, John Nolon, advocates for establishing Regional Governance, and transitioning human settlement from our bad private homes into high density human settlement areas with a target of 20 units per acre. This notion of confining growth patterns to non private development corridors is referred to as “Smart Growth.” Ominously, Smart Growth is cheerfully referenced in both plans. Please ask yourself why a Byway Plan that claims it is about “Tourism Promotion” doesn’t refer to tourism experts. What John Nolon writes about is crafting legislation that “immunizes” regional entitles from litigation and “all types of attacks including claims that regulations constitute a taking of property without just compensation.” Nolon also explains how an Agent, like the Adirondack Park Association (APA) allows for legal taking of land for public housing “over the often strenuous objections of local residents." Do you think maybe New York City has something up its Byway sleeve? Why is our Town Board not throwing Manning out of the room?

A quick example: Steve Aaron of Birchez, a public housing developer in Kingston: 1-Gets $1.8 million from we taxpayers to build a subsidized housing project 2- Aaron gets a VERY low ($100 per unit) tax rate that must be subsidized by the taxpayer as well 3- He sends Gov. Cuomo a check for $87,800 4- He sends $5,000 to Sen Bonacic 5- He sends $9,000 to Rep.Vito Lopez in Brooklyn (public housing must legally reach out to collect people from a broad geographical and ethnic cross section to be in compliance) 6- Aaron pays the politicians on time but never seems to pay his taxes in time and in full.

We are standing up against wise guy builders, their greedy political friends, and their personal fortunes by opposing the Byway scam. We don’t know who Mr. Leifeld is listening to, but fortunately wiser heads in Shadaken and Hurley find this plan too troubling to approve.

We are amateurs doing a job that is for a professional attorney. But we are doing far more work, far more research, and we care much much more about you & our town that those who are on bended knee to City Power.

For his entire political career, Mr. Bruce LaMonda has waved the banner of Home Rule. It is fortunate in every man’s life when he gets the opportunity to stand proudly by the core values he has espoused. This Byway Plan provides such an opportunity as without land use control – Home Rule is dead.

One more Byway Joy: one of the big goals of the Byway are massive infrastructure plans to redesign Route 28 so as to “slow traffic” with curb bump outs and a roundabout – that somehow seems like it would require property confiscation. And make every sane person drive somewhere else.

THE NEXT TOWN BOARD MEETING: Tuesday May 8th 7:30pm
Will They Be Holding a Byway Vote? They Won’t Say Yet.
Kindly Express Your Concerns and Do Your Own Research
Feel Free to Call Supervisor Leifeld at 657-8118

Posted by Mitchell Langbert at 6:00 AM No comments:

The Tea Party Republicans spent three years protesting the Obama health care plan, which was based on Mitt Romney's Massachusetts health care plan. Then, to prove their disenchantment with the Obama plan, they nominated Romney to be president.
Posted by Mitchell Langbert at 7:29 AM No comments:

The Rasmussen Reports daily Presidential Tracking Poll for Monday shows Mitt Romney earning 47% of the vote while President Obama picks up support from 45%. Four percent (4%) would vote for a third party candidate, while three percent (3%) are undecided.

I know that Rasmussen knows this perfectly well. The bias is not because of incompetence.
Posted by Mitchell Langbert at 3:35 AM No comments: