A Magic Bullet that Ends Agenda 21

I’m sorry that you had to miss Ms. Rosa Koire, the speaker in Olive tonight (please note that the speaker was tonight, not last night).   The information provided in Ms. Koire’s lecture was consistent with what I had heard in previous talks by Tom Deweese and others.  I am still interested in Congressman Gibson’s position on Agenda 21.

I would appreciate a statement from Congressman Gibson on two points:

(1) His position on Agenda 21 and its congressional abrogation
(2) Whether he will be willing to propose a law that would prohibit states from being governed by NGOs and would prohibit federal funding of any governmental organization that so delegates.

Posted by Mitchell Langbert at 1:15 AM No comments:

Article Four section four of the US Constitution requires that states maintain a republican form of government.  It states:

The United States shall guarantee to every state in this union a republican form of government, and shall protect each of them against invasion; and on application of the legislature, or of the executive (when the legislature cannot be convened) against domestic violence.

The environmentalist movement has advocated replacing the states' republican forms of government with non-governmental organizations that are appointed and then become organizational dictators.  For example, Agenda 21, chapter 27 states:


In practice, NGOs have replaced governmental decision making in the name of regionalism and globalism.  A resident of the Town of Olive wrote the following of a group called the Central Catskills Collaborative, an NGO:

Far more troubling than amusing is the stated goal of this group to become a state agency such as the Tug Hill Commission or the Hudson Valley Greenway. Although Peter Manning is removing such references from the CMP rewrite, the intentions of this group are well stated. They refused a Shandaken board member's request for language that would limit the CCC from becoming such an agency at the April 19 meeting. Anyone voting on this byway resolution must take a close look at these groups and see what the CCC has stated they wish to become.


A non-governmental organization cannot be a government agency in a republic.  In Canada, this process has proceeded to the point where NGOs are making zoning and other dictatorial decisions without public scrutiny.  Such an arrangement would be unconstitutional in the United States; it is incompatible with republicanism.

To the extent that NGOs have been granted governmental authority in the United States, such arrangements need to be ended because they are unconstitutional.

Wikipedia covers history about Article Four section four.  In the 1840s in Luther v. Borden  and in 1912 in Pacific States Telephone and Telegraph Company v. Oregon, the Supreme Court held that Congress, not the courts, must establish guidelines for defining republicanism. The one exception to the Supreme Court's deciding that the definition of republicanism is one for Congress has been the equal protection clause  Most of the debates about republicanism have centered on whether direct democracy and republicanism are equivalent.

Few Americans had contemplated supplanting republican with dictatorial authority until the global environmental movement began to advocate elimination of home rule.  Agenda 21 was signed by a Republican president, George H. W. Bush, but has been most aggressively implemented by Barack H. Obama.

It is up to Congress to define republicanism, and it would seem that to define it as consistent with NGOs' assumption of political power would be to end republicanism, despite Agenda 21's Orwellian claim that NGOs' sharing power enhances democracy.


Posted by Mitchell Langbert at 1:04 PM No comments: 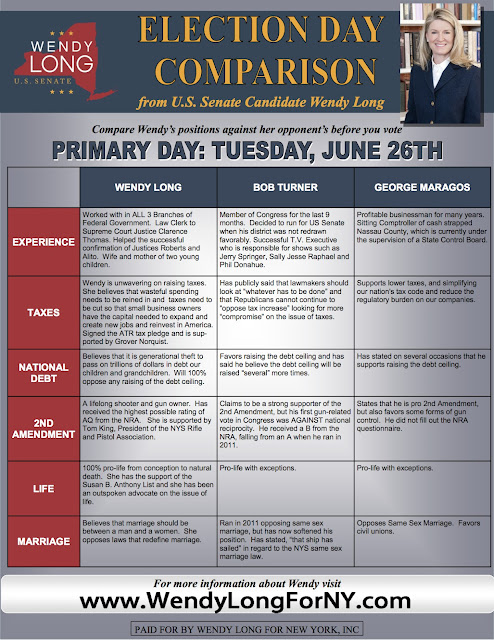 Posted by Mitchell Langbert at 12:29 PM No comments:

Author Rosa Koire Will Discuss Agenda 21's Impact on the Catskills and the Scenic Byway Plan on Thursday, June 28, 7:00 P.M. at the Olive Free Library on Route 28A in West Shokan (just past the post office). You are invited. 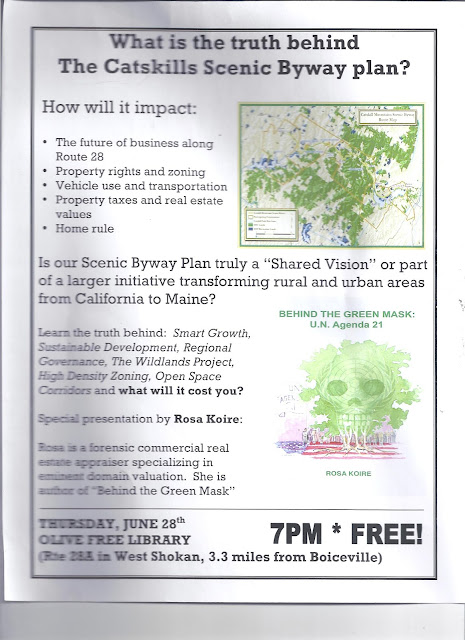 Posted by Mitchell Langbert at 12:46 AM No comments:

I just sent the following e-mail to state- and federal- level politicians:

I urge you to propose a bill that will prevent the transfer of governmental power to non-governmental organizations (NGOs).  This is a tactic that the extremist environmentalist movement has used to attack democracy.

There needs to be  a law that will stop all federal funding to localities (states or local authorities, including school districts) that transfer any political authority to non-elected, non-democratic, non-governmental organizations.  Towns that permit non-elected officials of NGOs to decide on zoning, for example, should be prevented from receiving federal funding.

This was proposed recently with respect to the 28 Corridor By-Pass by the Catskill Watershed Commission.  It is outrageous that taxpayer money is being used to replace democratic processes with a totalitarianism based on UN Agenda 21.  If you haven't read Agenda 21, I urge you to do so:

I received an e-mail from Robin Yess about Tuesday's primary.  I did a bit of homework about the three candidates, Wendy Long, George Maragos, and Bob Turner. Like most Republicans, the three say that they favor lower taxes; however, they are vague about how low.  Turner says that Obamacare should be repealed and tax increases should be avoided.  Avoided? How about tax cuts to eliminate the Departments of Energy, Education, and Labor?

Wendy Long is a lawyer. Her website says this:

The main purpose and idea of my campaign is not original. I can't claim authorship. An inspired group of New Yorkers and other Americans came up with the idea, about 225 years ago.
It's called limited self-government, of the people, by the people, and for the people.

No one in this country is above the law, and no one is beneath it. The law is what protects the weak from the strong, affirms the dignity of every person, and overlooks no one in its demand of equal justice.


That sounds good, but what does it mean?  Would she have opposed the Bush-Obama bailout of Wall Street and the Fed's $29 trillion subsidization of global banks?  Her Republican colleagues believed those actions were constitutional. Local news sources such as Cayuga County's Auburnpub.com offer sketchy information about the three candidates.

When you log onto George Maragos's website, there is a video that does not work properly. How come Netflix can stream two hour movies into my television, but Maragos can't get a one-minute video to work?  Also, his secure e-mail (the site doesn't give any other contact information) limits questions to 245 characters (characters, not words), so I could not ask him a few simple questions.

We must take action now to reduce the deficit, eliminate wasteful spending, and reform entitlements in order to restore America's economic strength, provide for individual opportunity and guarantee future prosperity for our children. Government programs which have proven ineffective and wasteful should be terminated...Medicare and Social Security are a sacred commitment to our seniors and should be protected. Senator Gillibrand voted to kill these programs by her vote against raising the national debt ceiling.

I thought the Bible is sacred, but Medicare is a political program.  Maragos puts Social Security up there with the Ten Commandments.  On the one hand he says that government programs that are ineffective should be terminated.  On the other he says that one of the most ineffective programs, Social Security, is sacred.   Might we conclude that Maragos is a Three-card Monte dealer who says one thing to attract conservatives' votes and another thing to attract special interest money?

I have a basic question for any candidate: Where did you stand on the bailout?  None of the coverage in New York's all-thumbs media answers that question.  I attempted to send e-mails to the three candidates.  Only Ms. Long has an e-mail program that allows voters to send her an e-mail to inquire as to her positions.  The following is the e-mail I sent to her aide, Lynn:

What are Ms. Long’s position on local governments’ transferring political authority to NGOs (as has been recommended with respect to the Route 28 Bypass proposal in Ulster County)? This is a longstanding strategy of environmental extremists like the WWF that has been supported by both Republican and Democratic politicians.

What is Ms. Long’s position on Ron Paul’s proposal to audit the Fed?

I just passed on your inquiry to Wendy.  She's traveling in Buffalo right now, but I'm hoping to have these answered asap.
Thnx
Lynn Krogh
518.618.7074
Lynn@wendylongfornewyork.com

My response to her was as follows:

Thank you. You’re the only campaign that has a way to e-mail questions, and I’m very impressed that you got back to me so quickly.

Of the three, Wendy Long seems to be the one who knows how to run a campaign.  So few candidates do.  I don't think we can expect a true limited government candidate at this point in history.  The best we can do is split the nation's governance between Democrats and Republicans and hope that they will do as little as possible. Unfortunately, both parties seem to like Agenda 21 and both love the Fed, so unless the public gets tired of being milked like cattle we can expect an increasing degree of totalitarianism no matter who gets elected.

Posted by Mitchell Langbert at 1:01 PM No comments: