I have sent the following e-mail to Peter Hogness of the Clarion, the newspaper of the Professional Staff Congress, the union of the faculty of the City University of New York (CUNY).

You have recently published an article concerning Anne Neal that I consider to have been unfair. For example, you call her an "ideologue". I would like to write a response in your newspaper of equal length to your article refuting your false claims about Ms. Neal and ACTA.

Recently, I blogged a response that included a quote taken from Ron Capshaw's Frontpagemag article concerning Professor Sandi Cooper. Professor Cooper sent a response to my Brooklyn College e-mail account asserting that Mr. Capshaw is a "seriously troubled individual" and suggesting that:

"You might at the very least acknowledge that Mr. Capshaw appears not to have understood a word of an undergraduate course where he sat for an entire semester, evidently living in his own script."

Professor Cooper also asserted in her e-mail that:

"your willingness to print as fact the idiotic red-baiting by a former CUNY graduate student, Ron Capshaw, (published originally in Frontpage) suggests that you enjoy red-baiting far more than fact checking."

In the interest of even handedness I have published Professor Cooper's entire e-mail on my blog. I have also invited Jamie Glazov and Ron Capshaw to respond to Ms. Cooper's statements. I have given Professor Cooper's views much more space than the quote that I pulled from Frontpagemag concerning her.

In contrast, the Clarion has not published both sides of the Anne Neal debate. In general, the Clarion has tended to be a left wing propaganda font that has rarely permitted alternative viewpoints.

I would like to ask you to follow the high example that I have set and permit me to write a feature length article to address the Clarion's assertions concerning Ms. Neal.

My blog concerning Professor Cooper is at:

John From Cincinnati Is Terrible, But Proves HBO's Creativity 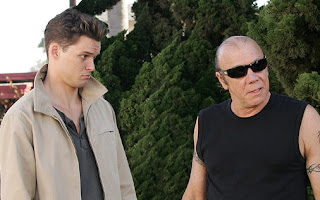 The HBO television show John from Cincinnati just ended. Nancy Franklin wrote a fine review for the New Yorker entitled "Dead in the Water". It was a long seven weeks. I am not adverse to new age, old age or any other kind of spirituality, and enjoy a good aliens or flying saucer movie (indeed, I was an X-Files fan for many years). I also enjoyed David Milch's Deadwood on HBO, which employed several of the same actors as John from Cincinnati. In general, John from Cincinnati's acting was competent except for Greyson Fletcher (Shaun Yost) who is hard to take (unless you're a pederast) and Rebecca De Mornay, whose anger quickly became monotonous.

Milch attempts something different and something creative in John from Cincinnati, and HBO and Milch deserve credit for taking risks and exercising imagination. For every home run there needs to be several strikeouts. John from Cincinnati is a strikeout both for the talented Milch and for HBO. The fact that HBO was willing to air something this bad and this different shows that its creative juices are flowing. I hope that the program's failure does not end Milch's opportunity to hit more home runs, such as his NYPD Blue and Deadwood.
Posted by Mitchell Langbert at 4:18 PM No comments:

The Small Hours of Republican Imagination

The Economist's August 11 print edition's cover story is about its claim that America is turning to the left. The leader or editorial on page nine blames social conservatism, the Iraqi War and "oxymoronic trust in big government conservatism" that George W. Bush and congressional Republicans share. The Economist believes that Republican social conservatism and support for big government will lead to a new and perhaps permanent Democratic majority.

In the final paragraph of the article, the Economist makes an important point:

Yet, the Republicans have discarded the limited government ideology, or at least its pretense, in favor of "big government conservatism" that provides pork and cronyism to elected officials in the name of "mercifulness". The longer article on this theme on page 20 notes that the US public now says that it would prefer a Democratic president by a 24-point margin due to:

"Growing worry about income inequality combined with growing support for the social safety net. The proportion of Americans who believe that the government should help the needy even if it means greater debt has risen from 41% in 1994 to 54% today...Today only 35% align themselves with Republicans, and 50% with Democrats."

Some of the reasons include the Bush presidency and the War in Iraq. Moreover:

"Mr. Bush has also presided over the biggest expansion in government spending since his fellow Texan Lyndon Johnson...He has increased federal spending on education by about 60% and added some 7,000 pages of new government regulation. Pat Toomey, the head of the Club for Growth says the conservative base feels disgust with what appears to be a complete abandonment of limited government."

That a conflict concerning small versus big government exists in the Republican Party at all, and that a Bush administration official considers big government to be more merciful than limited government, confirms that the GOP has lost its way. Mr. Gerson has risen through the Republican ranks yet is unaware of the limited government traditions of the United States that specifically led to the nation's preeminence; the humane nature of limited government; and, in contrast, the nation's failure during the 1930s due to the merciless government policies of (1) the Fed, which caused the Great Depression, and (2) the New Deal, which extended it. The greatest human-caused tragedies in history, Stalin's mass starvation of kulaks; the Holocaust and Mao's mass killings are all the product of big government. It is not clear to me how an American, much less a Republican, can call himself a "conservative" in the American sense and yet advocate big government.

Ronald Reagan won on a program of limiting government, ending regulation and cutting taxes. I am not clear as to why this program was popular in 1980 and 1984 but would not be, in Mr. Gerson's view, in 2008. The Republicans' "big government conservatism" seems to be a thin excuse for cronysim, pocket lining, pork and bloat, practices with which the current administration and the Republican congress have become associated. The only way for the Republicans to resolve this association is turnover.

The most serious conclusion that I draw from the Economist's leader and article is that Republican appointees like Mr. Gerson have not been exposed to classical liberal thinking. A new day must mean Republicans who understand how freedom works, unlike Mr. Gerson. Perhaps the likes of Mr. Gerson arise from failed educational institutions that are committed to left-"liberal" brainwashing.

Big government has existed in Europe ever since Gaius Julius Ceasar declared himself dictator for life, and it has been associated with merciless oppression ever since then. The United States grew most rapidly and drew the most immigrants when it had the least government. Big government leads to economic decline and inequality. The government of India is among the most interventionist and socialist in the world, and India leads the world with respect to child starvation. In India, big government has turned out to be merciless indeed. The inequality with which Americans have been concerned in the past couple of years, and the problems with the health care system, are both due to government. With respect to income inequality the problem is the Fed; and with respect to the health care system it is due to licensure and government regulation.

We have reached the small hours of Republican imagination. With speech writers like Michael Gerson, the Bush administration has shown that it is ill-educated. Until the Republicans begin to awaken from their sleep, they should stay out of office.
Posted by Mitchell Langbert at 7:15 PM No comments: