I read Antony Sutton’s history of Skull and Bones*(America’s Secret Establishment) last summer.  I’m not a conspiracy theorist, but Progressivism fits the Hegelian model that Sutton describes as Skull and Bones's ideology; moreover, the Hegelian model seems to have guided the direction of American politics for the past century.  The concept of gradual socialization leading to a socialist America was characteristic of many Progressives, particularly Walter Weyl in his New Democracy.  Sutton says something more:  the American political process has been an orchestrated dialectic between two apparently competing factions, but the end result of the dialectic will be a synthesis that benefits the elite of both factions.  As America becomes increasingly oligarchic there seems to be some meat on Sutton's discussion of Skull and Bones.

Sutton's history of Skull and Bones says more about American conservatism's being a form of Progressivism than it does about the left-wing Progressivism of Theodore Roosevelt and his cousin Franklin.  Everyone already knows that left-wing Progressives favor socialism.  There is more confusion about American conservatism, which claims to favor traditional American values.  There is, though, a socialist tradition in America that arches from Hamilton to the Whigs to the Progressives.  The Whig ideology was necessarily couched in individualist rhetoric just as Hamilton claimed to favor states' rights in The Federalist Papers.  In other words, Whig liberalism was baloney, just as today's Republican Party's claims of being for small government is baloney.

The Whigs didn't picture themselves as more conservative or more radical than the Democrats, only more in favor of public works, centralized control,  the public good, central banking, and subsidies to business.  Both American conservatism and American progressivism in their current forms are descended from the Whigs'  and Progressives' ideologies, but there was no Federalist, Whig, or Republican conservatism until  1912.   Since then, both American conservatism and American "liberalism" have been Progressive, and have had little regard for Jacksonian or Jeffersonian republicanism except in apologia.   Warren G. Harding ran on a platform of normalcy, as did Calvin Coolidge.  Normalcy or consolidation has been part of Republican Progressivism pattern ever since.  Reagan claimed that "government is the problem," but he consolidated government. He did not reduce it.  In order to attract Americans who continue to believe in 19th century liberalism, the Republican Party has continued to lie and claim that it favors small government.

Skull and Bones was present at the founding of both major political factions.  Much later, the Kennedy administration appointed Skull and Bones members (McGeorge Bundy, William Bundy, and Averell Harriman, along with a range of cronies.**  Kennedy had asked Skull and Bonesman Robert Lovett to join his cabinet, but Lovett  refused, recommending the Bundys instead. ) As well, Skull and Bonesmen have dominated American conservatism:  William F. Buckley, George H.W. Bush, and George W. Bush were members.  There is little of Jefferson or Jackson in American conservatism, which is pro-bank, pro-banker, pro-big business, and pro-elite.

Since 1912 American politics has been a Hegelian battle between two versions of Progressivism; the ideas of the founding fathers are recognized rhetorically, especially in the conservative version, but are ignored in operation by both factions.    The outcome is a mix of fascism and socialism, an oligarchy based on money printing and finance.

**Domhoff credited Lovett, Harvey Bundy and John McCloy with having a close working relationship; and credited John F. Kennedy as accepting Lovett's advice to appoint Dean Rusk as Secretary of State, Robert McNamara as Defense Secretary, and C. Douglas Dillon for the Treasury.

***Thus, TR became president, and the Order of Skull & Bones for the first time moved into the White House. Roosevelt surrounded himself with Bonesmen. His successor in 1908, William Howard Taft, was himself a second generation member of Skull & Bones.
Posted by Mitchell Langbert at 1:01 AM No comments: 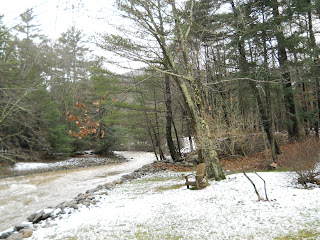 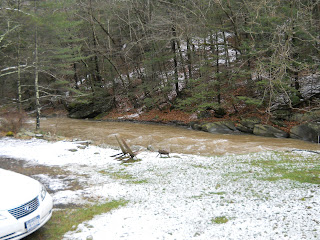 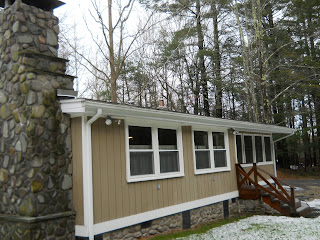 I shared a few pictures of my home in West Shokan, New York with some friends.We had a pre-Christmas snow last night, but the melt started almost immediately, causing an upsurge in the stream, a dense fog, and flooding in nearby Woodstock, NY.  May the criminals in Washington and Albany remain far away from our home, and God bless you this holiday season.
Posted by Mitchell Langbert at 11:17 PM No comments:

Letter to Larry Mone of the Manhattan Institute: America a Pig State

Thank you for your fundraising letter of December 4.  I think highly of much of what the Manhattan Institute has done.  Examples are Brian Anderson's book on political theory, which I reviewed for the Journal of Interdisciplinary Studies, and Theodore Dalrymple's essays.  Since 2008, when I last contributed to the Manhattan Institute, I have concluded that the United States is in worse shape than I had thought.  The days of a republican United States will not return, nor will the American tendency toward an oligarchic, dictatorial system reverse.

I hold the Manhattan Institute's perspective partially responsible for America's decline into oligarchy.  American conservatism is rooted in Republican federalism whereby the federal government exercises hegemony over the states, monetary policy, constitutional interpretation, and economic regulation.  From the nation's beginning, Hamilton urged an increasing degree of centralization and federal power; your organization's approach is in the Hamiltonian conservative tradition.

Oligarchy, centralization, and increased government authority result from the interaction of the brokerage of special interests and Federal Reserve Bank counterfeit:

We are past the point where the size and power of the federal government can be explained as a natural outgrowth of federalism, technology, or economies of scale.  Rather, we live in an oligarchy of financial interests cartelized through the Federal Reserve Bank.  The Hamiltonian vision that you advocate depends on criminality:  the banking system's stealing from the public.  The eventual result has been (not will be) the dissolution of the American republic into an authoritarian, criminal organization. The dissolution has already occurred; the government of the United States is an irretrievable abomination--a pig state.  Please take my name off your mailing list.

King Barack Murders Children, Moves to Take Away Your Right to Defend Yourself from His Majesty

King Barack sheds a tear for the children murdered in Connecticut, but he sheds no tears for the 168 children he and his colleague George Bush have murdered in Pakistan (h/t Mike Marnell).  In Vietnam Lyndon Baynes Johnson and the United States government murdered several hundred thousand Vietnamese children.  Now,  cheered on by America's backward media, Washington's serial killers aim to ruthlessly capitalize on a tragedy to  illegally prevent you from defending yourself from them.


In an extensive analysis of open-source documents, the Bureau of Investigative Journalism found that 2,292 people had been killed by US missiles, including as many as 775 civilians.

The strikes, which began under President George W Bush but have since accelerated during the presidency of Barack Obama, are hated in Pakistan, where families live in fear of the bright specks that appear to hover in the sky overhead.
In just a single attack on a madrassah in 2006 up to 69 children lost their lives.
Chris Woods, who led the research, said the detailed database of deaths would send shockwaves through Pakistan, where political and military leaders repeatedly denounce the strikes in public, while privately allowing the US to continue.

"This is a military campaign run by a secret service which raised problems of accountability, transparency and you have a situation where neither the Pakistanis nor Americans are clear about any agreements in place and where the reporting is difficult," he said.
Posted by Mitchell Langbert at 12:15 AM No comments: