Economic Centralization and the Suppression of Speech

Recognition of the link between political centralization and loss of liberty has a history going back to classical days, when the Romans of the republican era decentralized power with four different assemblies capable of passing laws; as well, tribunes, associated with the tribal or plebeian assembly, could void the laws of any assembly.

In republican Rome the word "king" or "rex" was a kind of curse, and much of the republican political tradition involved avoiding devolution of power to one or a few individuals. The republican Roman constitution included collegial office holding (whereby two individuals held the magistrate positions at the same time) and rotation of office, generally for each year, although censors (who took censuses and could evict members of the Senate) mostly served for 18 months.

Does technology encourage centralization or decentralization?  Recent technologies such as Facebook seem to reflect a centralizing tendency, but technological change occurs slowly, so its political effects are complex.

Early modern technological developments, such as the printing press and power loom, tended to encourage decentralization of both thought and wealth.  That may go back to the Middle Ages, with the invention of three-field rotation. Decentralized Western Europe may have been a bit more innovative than more centralized Medieval economies in Asia Minor and the Far East. The wealth associated with industrial technology permitted alternative sources of authority that countered the centralizing policies of Henry VIII. The printing press enabled many voices to express themselves to the public.

Some technologies facilitate  authority; other technologies weaken it.  Technology that facilitates small-scale industry counters authoritarianism because it creates multiple concentrations of wealth. When innovative processes are occurring throughout the economy, citizens are encouraged to think for themselves, creating multiple viewpoints.

Economic centralization deadens economic growth and opportunity. But does it deaden thinking?  The ancient Chinese Qin Dynasty established the civil service in the third century BCE. This created an intellectual elite that made impressive contributions, but the centralizing pattern limited the course of Chinese economic history for more than two millennia.  Refinement of thinking by creation of a managed elite may be odds with economic advance.

In modern America the Hamiltonian impulse--a fixation on public works, central banking, subsidization of industry, tariffs, and centralized economic control--has contributed to a centralizing impulse that has been both political and economic.  The Hamiltonian impulse is mostly associated with support for education.  The Whigs were the chief advocates of public education, and the Republicans passed the Morrill Act during the Civil War.  A more recent wave of centralizing Hamiltonians, the New Deal Democrats, also passed major legislation expanding higher education, the most famous of which was the GI Bill.

Descendants of Hamilton, the Progressives, took a number of centralizing political and economic steps, including the establishment of the Federal Reserve Bank. As well, the Hamiltonian impulse encouraged managerial innovation to proceed along scientific management and Fordist lines. The historian Alfred Chandler claimed that economies of scale led to economic gains, but that is not necessarily so.  Economies of scale create gains in some industries but not others.  State subsidization of large-scale enterprise does not guarantee economic benefits.

Large-scale industry in the Progressive era adopted the  assembly line, which requires uniformity of behavior and thought.  This extends to managerial employees, who are expected to conform to corporate norms. Managerial innovations in the 1980s, such as emphasis on strong corporate cultures and total quality management, further encouraged uniformity of thought. That emphasis coincided with further expansion of America's paper money system.

The three societies that encouraged decentralization--Western Europe after the devolution of the Roman Empire,17th century England and its country party before Walpole, and the United States until 1900--were also the most innovative.  Several recent news articles point out that America's global share of startups is in decline. As well, the rate of startups in highest in Latin America rather than the United States.  Perhaps Latin economies have the most dynamic future.

Perhaps not.  There is a degrees-of-freedom issue in these measures. Since the US also has a disproportionate share of successful large businesses, the proportion of workers engaged in startups has to be limited by this alternative and by other institutions, such as education, which likely draw workers whose opportunity costs include entrepreneurial careers.  Better measures than startup rates would adjust for opportunity cost (lost wages) and the effects of startups on national economic growth. These might include adjustments for the real hourly wage and the national economic growth rate.  A high rate of startups that do not succeed may mean that startup rates measure desperation rather than innovation.

In years gone by, some labor scholars hoped that labor unions might counteract the tendency of Progressivism toward economic and authoritarian centralization.  However, unions have not been of interest to white collar North Americans, who tend to identify with management.  Also, US unions have been riddled with agency and corruption issues, and they have failed to encourage participative democracy.

American governmental policy has been to encourage centralizing technology and to discourage decentralizing technology. It has done so by centralizing the provision of credit through the Federal Reserve Bank and taxing the returns on private savings. Small business owners or would-be owners find it difficult to save. Artificially suppressed interest rates encourage substitution of capital and plant relocation for labor and high wages.  The result is that there is full employment but workers earn less than the marginal product.  Besides leading to income inequality, this policy makes it difficult for upstarts to form capital, which is mostly inaccessible to them through regulated banks. Regulated banks favor Wall Street, large investors, large corporations, and governments over decentralized enterprise.

Regulation in general makes it difficult for upstarts. Compliance with laws like Sarbanes Oxley is expensive. Per unit regulatory costs fall most heavily on small firms, which become less competitive.

One of the key arenas in which federal centralization has reduced diversity is the media.  Money center and Wall Street funding have been readily available for mergers and acquisitions by media conglomerates. That goes back to Adolph Ochs's Wall Street-funded purchase of the New York Times in the 1890s.  The enhanced centralization limits alternative points of view and encourages authoritarian attitudes, political correctness, and dumbing down. Dumbed down journalists at places like the Daily News and CNN seek controversial social issues but do not understand monetary issues.

Higher education was formed along the same lines as other Progressive institutions, including large corporations and banking. Higher education was largely shaped by foundations funded by industrial and banking interests, and the two chief foundations, the Carnegie Foundation for the Advancement of Teaching and the General Education Board, encouraged a centralizing, top-down approach. The concept of a centralized system of knowledge goes back to Sir Francis Bacon, who famously said that knowledge is power.  Bacon advocated a managed system of science. This was put into play in the US during the Progressive era.


One question is whether the gains from a market economy are amplified or muted by a controlled intellectual hierarchy such as emerged in the early twentieth century in the US.   Intellectual control leads to refinement of science but reduced economic outcomes.


Posted by Mitchell Langbert at 2:37 PM No comments:

Democrats to Aim to Subvert Democracy

I was just listening to a briefing by Jim Rickards, who describes this coming election, November 6, as possibly, but possibly not, giving a slim lead to the Democrats in the House.  The likelihood is that the GOP will retain the Senate, although the margins for both are small.  If the Democrats do win the House--whether or not they win the Senate--they will use their slim majority to threaten both Trump and Kavanaugh with impeachment. Never mind that Ruth Bader Ginsburg breached basic canons of judicial ethics and went around advocating for her backward political views.  The Democrats' belief in democracy is this:  Any election they win is fair; any election they lose needs to be overturned.

Without having studied the key districts that are at stake, I'm not sure that polls have much meaning following their failure in 2016.

Posted by Mitchell Langbert at 11:08 PM No comments: 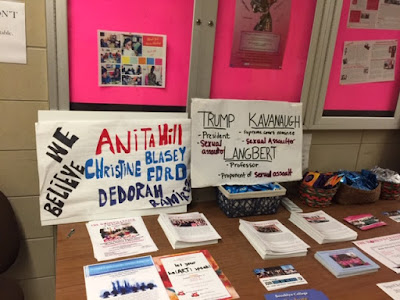 Democrats at the Daily News Get Their Tutus in a Twist

The Daily News calls me a "jerk with tenure," but adds, ""The appropriate response to false or offensive speech is not to prohibit it but to respond with more speech." That's not bad for a state whose governor has hoped that conservatives would exit on a trail of tears.
Posted by Mitchell Langbert at 10:17 PM No comments: