Why Not Gary Johnson?

From Ulster County political guru Robin V. Yess:   This is from inside the Gary Johnson campaign. The Libertarian Party National Convention is May 2 thru 6 in Las Vegas. Still wondering if Ron Paul will crash it?

I don’t know.  I would like to know if Ron Paul is considering a third party bid. If not, it will be worth putting energy and money into Gary Johnson’s Libertarian Party campaign. Johnson is an intelligent, competent leader, with a much stronger resume than either Romney or Obama.  As governor of New Mexico Johnson cut spending with a Democratic legislature. Compare that to our Republicans in New York who specialize in public housing and corrupt deals with destructive real estate developers.   Nationally, we have a Democratic candidate who sponsored Romneycare and a Republican candidate who sponsored Obamacare.  That Gary Johnson was given short shrift in the GOP primary next to extremist kooks like Gingrich and Santorum and a corporate welfare crook like Oromney (or is it Robama?) is proof enough that the two party system is broken.  I’m hoping for a split government, with a GOP Congress and a Democratic president.  However, if Paul runs it is conceivable that his percentage could compete with Oromney and Robama.  Perhaps we can get rid of the broken two-party system.

From the Johnson Campaign:

All over the country, liberty-minded activists are preparing to converge next week  to nominate the Libertarian Party candidates for President and Vice-President of the United States.

With those nominations, the 2012 history-making begins.  There are only three candidates for President who will be on the November ballot in all 50 states.  The Republican candidate – most likely, Mitt Romney; the Democrat candidate, Barack Obama; and the Libertarian Party nominee.  Essentially a three-way race for the White House.  And as you well know, I hope to be that ‘third’ cho ice as the Libertarian nominee.

In poll after poll, large majorities of voters are making it clear that they are, more than ever before, open to the idea of a fiscally conservative, socially tolerant candidate – a choice that will not be offered by Mitt Romney or Barack Obama. Those voters are also making it clear that the business-as-usual represented by the tired two-party duopoly is not what they want in 2012.

You and I have worked long and hard to get where we are today.  Our goal has been – and remains – putting liberty, truly smaller government, and individual freedom on the American political agenda.  Well, friends, we are on the verge of doing just that.  Thanks to your support and hard work, we are within a few short days of achieving what the elite media and the political establishment never believed could happen: An election in which Gary Johnson will be on the ballot – in every state - as a very real alternative to Mitt Romney and Barack Obama.

Then, it gets extremely interesting.  But only with your help.  Yes, we have done the work, we have traveled far to get here, and we are on the verge of making history.  We are giving America the choice they want and deserve.  But that choice will only be real if we are able to get our message out.  The Republican and Democrat establishments are amassing hundreds of millions of dollars to flood the airwaves, the phone lines and the Internet with their ever-shifting appeals.

Without your help, our message of liberty and freedom will be lost in the  two-party noise.   We have earned our place in the national debate, but we won’t be heard without the financial resources to take our campaign to every corner of the nation – to build on the base that has been built by Ron Paul, by our campaign, and by you.

With the nominating convention coming up next week, there are only a few days left to have your contributions ‘matched’ – or essentially doubled from the Presidential Campaign Matching Fund.  Every one of those dollars is critical. Please go to GaryJohnson2012.com today and help seize the amazing opportunity we have, together, created for liberty, freedom and real prosperity.  Ending needless wars, balancing the budget, getting the government out of boardrooms and bedrooms alike.  We must tell America there is a candidate who will do those things, if given a chance.  Your contribution will let us do just that.

Go to GaryJohnson2012.com today and send that message.  We ARE about to make history – and it begins in Las Vegas next week.

Posted by Mitchell Langbert at 7:50 PM No comments:

Is This for Real? Was JFK Shot by His Driver?


Sharad Karkhanis forwarded this video. It depicts the Kennedy assassination, but unlike any other footage it shows the driver shooting.  There are a few alternative explanations:

The following is the e-mail Sharad sent me:

If this hasn't been altered it certainly a big WOW and would also explain why the "investigation" never came up with anything other then Oswald as the killer.... an inside job investigated by the perps.
Apparently, Jackie Kennedy always believed L.B.J. Was the one responsible for JFK's death and her private papers were supposed to have been kept secret for 75 years. However, the Kennedy daughter has just decided to release the papers, early, over her deceased mother's desire for privacy. Did she decide to release her mother's papers to coincide with the release of this video ? Who knows more about the attached video.....like who filmed it and where it has been all these years... And who the driver was ... And what happened to him...
THIS is Jaw dropping !
Watch closely......
Lyndon Johnson said on TV the day after the Kennedy assassination that the world would never know all the facts surrounding Kennedy's killing for 75 years until the complete file of information would be revealed. Walter Cronkite announced on TV, that the Nation could not handle the full truth in that Century. Well, only 47 years have passed since Kennedy's assassination.
This is hard to fake and is very chilling....... Who was driving the limo?
This video shows the limousine chauffeur that takes President J.F.K. And his wife, November 22nd 1963 in Dallas , Texas , shooting the gun with his left hand. This was the video that the CIA did not show to the public view. And did you ask yourself why was Jackie trying to run away towards the trunk, away from the front of the car? And why was JFKs skull wound in the front, when supposedly, Oswald was to have shot him from the back?
Watch the attached video .

Posted by Mitchell Langbert at 7:11 PM No comments: 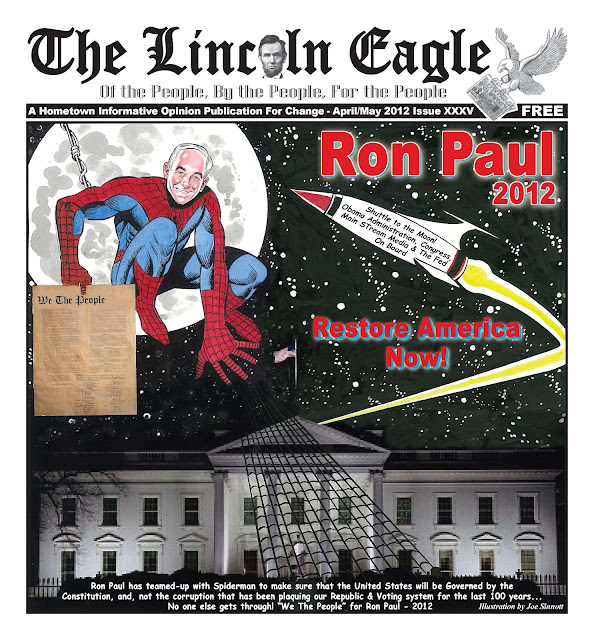 For this week's GOP primary, The Lincoln Eagle, Mike Marnell's edgy, pro-Ron Paul newspaper based in Kingston, NY,  features a cover drawing of Ron Paul as Spiderman.  The drawing is by Joe Sinnott, the 86-year old inker for Marvel Comics whom Stan Lee called Marvel's best. Wikopedia says that Sinnott has worked for Marvel for 60 years, including 16 on Fantastic Four as well as The Avengers, The Defenders and Thor.  Sinnott lives in nearby Saugerties, NY.
Posted by Mitchell Langbert at 12:02 AM 1 comment: