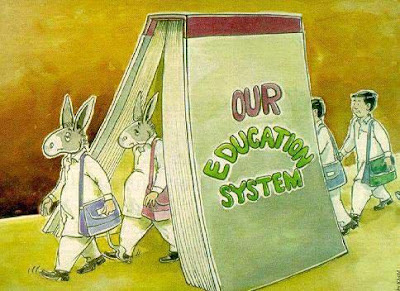 H/t Spread the Truth on Facebook
Posted by Mitchell Langbert at 5:45 PM 2 comments:

Wisconsin Governor Scott Walker's victory in his recall fight has renewed interest in public sector unions.  Rasmussen suggests that Walker's win will spur other states to cut back on benefits to state-level unions.  Nevertheless, Rasmussen finds that 49% of Americans favor public unions while 46% oppose them.  However, Rasmussen's numbers don't disaggregate respondents who belong to unions and so have a financial incentive opposed to other taxpayers'.

If the employed US labor force, including farm workers not counted in the BLS's official union density numbers, is about 139.8 million, as of  May the density (percentage) of union workers, including farm workers, is about 10.5% (assuming farm workers don't belong to unions).  Note that 139.8 million is only about 44% of the total US population of 320 million.  About a quarter of the population is under 18 and about 12.5% is over age 65 and receives Social Security.  Unionized government employees are about 5.4% of the employed labor force and about 4.9% of the total labor force.  I don't believe that this number includes union retirees.

If one excludes union members from the Rasmussen poll, the three percent balance in favor of unions (49% to 46%) will shift to a significant opposition to public sector unions.  Let's say 80% of union members favor public sector unionism. Let's also say that of the 243 million Americans over 18, 11.8% either belong to  a union or have a spouse or parent who does. If so, the 49% is reduced to about 40% and the 46% is reduced to 44%.  Public opinion among non-union Americans would then be 47.6 % for public unions and 52.4% against.

The statistics for taxpayers not in unions are likely even more opposed.  Taxpayers are a subset of the total population. They must subsidize union members' pay.  If unions boost pay, then taxpayers likely have a conflict of interest with the unions unless the government manages to efficiently enhance productivity in step with wage increases.  Since governments and their unions do not implement incentive pay and are famous for bureaucracy, it is difficult to imagine how that would be accomplished. Government employment levels in highly unionized states are no lower per capita than employment levels in states with right-to-work laws or without bargaining laws.

Prior to the adoption of bargaining laws for public sector workers, Wellington and Winter argued that public sector unions would have excessive bargaining power because services like police and sanitation are monopolies with price-inelastic demand.  In other words, governments tend to monopolize services that are price inelastic.  As is well known to labor scholars, industries with price-inelastic demand tend to have high wages.  Wellington and Winter could not have foreseen that unions would not only increase wages but lobby to increase demand for their wage bill--the employment level multiplied by the wage.

Mancur Olson and George Stigler wrote articles and books in the 1970s and 1980s that showed that special interests can extract rents from the public through lobbying.  Public sector unions are well-placed to extract rents because they are easily organized and can develop close relationships with elected officials.  New York, where I live, has seen a high public sector union density and a high number of taxpayers leaving the state.  I am a public sector union member.  Unless one is in an ultra-high-wage profession such as investment banking, law, advertising, or other financial services, or is otherwise subsidized by the state as a public sector employee or health-care worker, it is very difficult to flourish economically in New York State.  New York's population has hardly grown since 1960, when public sector unionization became prevalent.


As the burden of increasing costs has become difficult for taxpayers to bear, there is increasing resistance to unions.  People who do not pay taxes and beneficiaries of public sector spending constitute a large percentage of those who oppose cutbacks.  Tax systems are typically set up so that those who are the wealthiest have the most loopholes.  Those who work hard and generate the wealth necessary for public sector services are burdened with high taxes.  Generally, public sector services range from mediocre (police, roads) to non-existent to destructive, as is the case with drug enforcement, New York's Department of Environment Conservation and Department of Environmental Protection, its bogus building code, its dismal school system, and its destructive welfare system.

Come to think of it, life would be much better if we cut public sector employment by 80%.
Posted by Mitchell Langbert at 4:13 PM 2 comments: