The Wall Street Journal reports that Mitt Romney (R., Utah), Cory Gardner (R., Colo.), Lisa Murkowski (R., Alaska) and Kevin Cramer (R., N.D.) oppose the nomination of Herman Cain to the Federal Reserve Board.  Their opposition underscores the gulf between President Trump and mainstream Republicans, and it also underscores the meaning underlying the term deep state.   In a 2012 op-ed in the Journal Cain came out in favor of the gold standard. The gold standard is anathema to Wall Street and its pro-deep state shills. For instance, "journalist" Michael Hiltzik writes an uninformed piece in the LA Times.

Using insulting language, a habit increasingly characteristic of a media that has lost its moorings, Hiltzick makes the factually false claim that the gold standard led to instability in the interwar period.  As Friedman's history shows, the Fed's paper money policy led to the Great Depression. In turn, the mismanagement of the paper money banking system was multiplied by Herbert Hoover's jawboning about wage cuts and the Smoot-Hawley tariff. A master of nonsequitor, Hiltizck writes:


If the economy of one country ebbed relative to another, preserving the gold standard meant that something else would have to give — laborers thrown out of work or wages brought down.

This reflects a misunderstanding of what an economy is, what the subject of economics studies, and how paper money works. Paper money does not repeal the laws of supply and demand, Hiltzick's claim notwithstanding. The gist of the paper money system is that wages are systematically brought down through money illusion, a point that is lost on Hiltzick (but not the Keynesian economists to whom he refers).

Hiltzick's discussion of Friedman's Capitalism and Freedom overlooks Friedman's points that the Fed caused the Great Depression and that Friedman's idea of a fixed monetary rule, which turned out to be a complete failure, could mimic a gold standard. True, following the failure of his fixed monetary rule Friedman remained a member of the helicopter crowd--a term Friedman himself first applied to monetary creation. Those who do not do good service to Wall Street do not win Nobel Prizes.

Hiltzick cites a group of Keynesian and monetarist economists hired by investment banker-financed Ivy League universities (see my piece in Industry and Higher Education) without Hiltzick's grasping that far worse instability has occurred since 1913 than before and that gold was at most an indirect cause of the Great Depression; mismanagement of the paper money system was the chief cause, along with ham-handed fiscal and trade policies. These economists are unapologetic in their advocacy of instability-causing policies, one outcome of which was the failures of 2008.

The two-pronged issue that is most important to the deep state is its control of money and its ability to direct the economy through credit.  There are two categories of gold standard opponents: The first knows that it is a servant of power and of increasing income inequality. The second doesn't know, actually believes the nonsense taught in basic economics classes, and is useful to Goldman Sachs and Mitt Romney.

That Trump would consider a gold standard advocate means that he is better than I thought in 2016. In making donations to Republicans, I will be careful to donate to PACs that oppose the deep state. I will avoid the likes of Romney, Gardner, Murkowski, and Cramer.
Posted by Mitchell Langbert at 3:23 AM No comments:

I received the following email from Larry Ward of Constitutional Rights PAC.  I have seen firsthand the opposition to freedom, especially freedom of speech, among America's Antifa left and its media mouthpiece, whose elements include the New York TImes, NPR,  the New York Daily News, and Inside Higher Education. I have emailed Mr. Ward that there needs to be a proactive movement of conservatives who will do to leftists what the left and its media mouthpiece attempted to do to me. I beat them on the defense; now it is time to crush them on the offense.  Ward's email follows:

It has become incredibly dangerous to be a Conservative in America.

If you voice an opinion that doesn’t line up exactly with the current Radical Leftist agenda, you run the risk of being deplatformed on social media, banned from establishments, assaulted on the street just for wearing a MAGA hat, and most recently, have a campaign against you demanding that you be blacklisted from employment.

The Far-Left is now calling for the ostracization of former Trump employees, telling corporations that his “bigoted” admins don’t deserve the luxury of a decent job after resigning from their position.

This campaign is being led by an organization known as “Restore Public Trust,” which advertises itself as a “nonpartisan” watchdog that exposes corruption in the government, yet it targets conservatives exclusively. 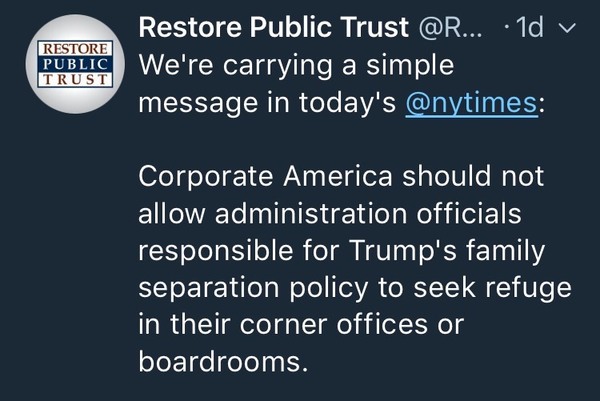 They want to see the lives of conservatives completely ruined, and they won’t be satisfied until they see you on the street begging for change. You’ve seen what happened to Tucker Carlson and Judge Jeanine. The Left used their liberal courtrooms to try to strong-arm Fox News into tossing them aside.

“Boycotting” former Trump admins may not seem like a big deal to the average American, but it’s unethical and would set an extremely dangerous precedent.

If you voted for Trump, you are also at risk for being targeted. You could face the same level of discrimination as his admins, simply for supporting America and her President.

Be sure this doesn’t happen to you or your loved ones. Send a message to the White House and make sure the President knows there are good Americans like yourself who aren’t afraid to stand up to these radical Leftists.

P.S. Send your message to President Trump today and let him know you will not accept the weaponization of Corporate America!


I sent the letter that CRPAC provided:


April 10, 2019
Dear President Donald J. Trump:
Dear Mr. President,
It has come to our attention that a left-wing organization known as “Restore Public Trust” is targeting conservatives and threatening to boycott companies who would hire your former admins, namely Kirstjen Nielson, over the stance that was taken to protect our country and her borders.
We don’t need to remind you how dangerous this new precedent is for the people, but take our word that we refuse to be intimidated by this group, or any organization who seeks to destroy the livelihood of someone just for holding a different opinion. These evil, underhanded tactics will not sway our support for you as our President, and, indeed, it is our very support which allows groups like Media Matters and Restore Public Trust to reveal their true colors as the corrupt, anti-American individuals that they are.
The United States has seen many great improvements to its infrastructure since your inauguration; decreased unemployment, corporate deregulation, lower taxes, and a boost in our overall economy. It is a shame that the Left is too blinded by their hatred to see this.
Thank you for all that you’ve done for our country, Mr. President. We will continue our unwavering support for you and our American values.
Signed,
Concerned American
Sincerely,
Dr. Mitchell Langbert
PO BOX 130, 203 WATSON HOLLOW ROAD
WEST SHOKAN, NY 12494

I also wrote a letter to Mr. Ward:

Can conservatives put together a group of say 15,000 or 20,000 letter writers to reverse the strategy of these groups? If you look me up, you will see that the media collaborated with a group of Antifa fascists at Brooklyn College to try to fire me.  I have been thinking of ways to not only counteract them, but outdo them.  I’d be glad to work with you on a project of this kind.
Sincerely,
Mitchell Langbert
Posted by Mitchell Langbert at 1:10 PM 1 comment:

Dan Stein, president of the Federation for American Immigration Reform, has filed a formal legal complaint with the Internal Revenue Service  respecting the tax exemption of the Southern Poverty Law Center, the racketeering-and-political-advocacy group founded by Morris Dees, who along with chief executive Richard Cohen, has resigned from the organization amid a flurry of scandals.

SPLC went way over the line in this last election. It publicly engaged in deep, deliberate, and unlawful participation during the 2016 presidential election cycle, flagrantly violating its non-profit tax status,”  “The IRS should investigate all of these instances, and take appropriate steps to either sanction and fine the SPLC, or remove its tax-exempt status as a public charity. We are alleging – via meticulously-detailed documented evidence – that it repeatedly engaged in widespread, illegal electioneering in 2015 and 2016.”

The New York Times has used the Southern Poverty Law Center as a source more than 2,000 times.  The organization has, using extortion and fraud tactics, amassed an endowment in excess of $300 million dollars, larger than the wealth accumulated by many of the leading mafiosi.
Posted by Mitchell Langbert at 11:19 PM No comments: