Posted by Mitchell Langbert at 4:52 AM No comments:

The Kingston Freeman published my letter on August 28.

The Town of Olive is considering a comprehensive plan.  The motivation, debate and the plan itself reflect Olive’s, New York’s and America’s moral and consequent economic decline.

Supervisor Berndt Leifeld told a packed town meeting  and a well-attended Town Board meeting  that the plan need not be taken seriously because its chief purpose is to procure grant money.

Starting with a lack of integrity, the plan was drafted by a politically correct consultant from Beacon who parrots the superstitious and ideologically-driven radical environmental claims of the International Council of Local Environmental Initiatives (ICLEI) and Agenda 21, the globalist United Nations manifesto beloved by Goldman Sachs and DuPont.

The plan should not be so called. It is an environmentalist rant that proposes expensive projects such as a new community center and a new town hall without considering costs, benefits or the effects on taxpayers and homeowners.

More broadly, the plan follows Ulster County’s general commitment to excessive construction costs at the law enforcement center and Golden Hill Health Care facility (which, if authorized, will host 1 percent — 250 -- of Ulster County’s senior citizens at a cost of between $1,000 and $2,000 per Ulster County household -- of which there are about 67,000).

Given President Obama’s parlous economy, it is astonishing that  Leifeld has chosen to propose a reckless spending spree and crackpot regulatory binge without considering that since Congressman Hinchey’s election in 1991, Ulster County’s economy has grown at one third the national average.  The county’s high school and college graduates have been driven to move to states that would not consider ICLEI’s superstitious radical environmentalist claims.

Benjamin Franklin said that America would be a republic — if we can keep it.  The voters of Olive, Ulster County and the United States do not appear to be capable of  keeping a republican form of government.

MITCHELL LANGBERT
Posted by Mitchell Langbert at 11:08 AM No comments:

Agenda 21: Ignorance Is Not a State of Grace

Agenda 21 is a UN statement that, in 1992, was signed by the United States under the George H. Bush administration.  It advocates globalization, extreme environmentalism, and increasing the United Nation’s control over local governance. It is consistent with Congressman Maurice Hinchey’s proposal to turn Ulster County  into a federal park and with increasing Wall Street’s control of water rights, farm land, and local governance.  It can be read at http://www.un.org/esa/dsd/agenda21/.
Posted by Mitchell Langbert at 4:05 AM No comments:

Editor
Wall Street Journal
Dear Editor:
Irene is the Greek word for peace.  For the past few days Americans have anticipated the worst hurricane in decades:  Hurricane Peace.  But the media and politicians seem not to have noticed.  Despite an ever- expanding education system, more than other democracies, which have mostly become tyrannies,  America is becoming an idiocracy.  There’s a link to the persistent ethics decline and to the insistence on  Keynesian economics as well.  A nation that fears Hurricane Peace is unlikely to conceive of moral foundations to action or to think logically about economic policy.
Sincerely,
Mitchell Langbert, Ph.D.
Brooklyn College
Posted by Mitchell Langbert at 2:23 AM No comments: 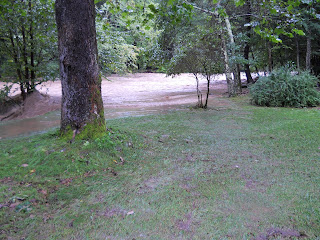 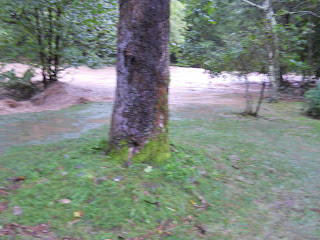 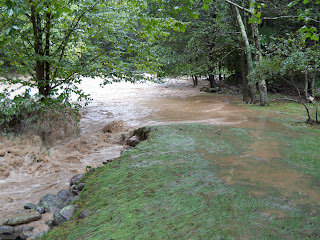 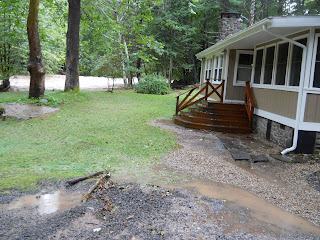 As I blogged earlier today, Hurricane Irene caused the Bushkill Creek to overflow onto our lawn, but before the overflow was sufficient to threaten the house, debris blocking a downstream bridge was loosened and the stream receded quickly.  I grabbed a camera as the stream was receding back to its banks. At its peak the stream was covering most of the lawn.
Posted by Mitchell Langbert at 12:36 AM No comments:

Update on Irene: My House Flooded Out

Sunday night I was optimistic, but my house ended up being flooded out. The Bushkill broke the bank on my property for the first time in more than 50 years. It did not reach the house. The reason for the breach was debris that had collected under a bridge. It broke through just as the overflow was reaching the house. At that point the Bushkill went down about two feet.  But my basement was flooded and I lost my furnace and hot water heater. We're still out of power. I'm posting this from a computer shop in Kingston. I probably won't have power or Internet until the weekend.  My earlier blog is an example of excessive optimism. I'll remember that the next time I think about making an investment.
Posted by Mitchell Langbert at 3:50 PM No comments: 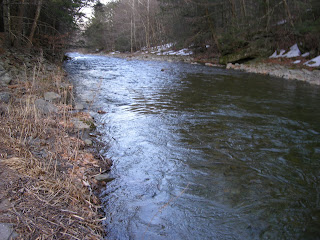 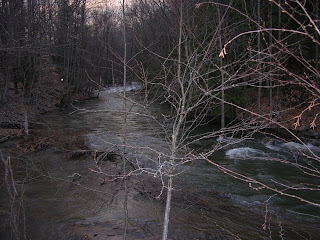 So far the Bushkill Creek near Maltby Hollow is not as high as it was earlier this week, but the rain is coming down hard.  The state has a meter across the stream and it's still in the 2+ feet range. With one day, 4 inches rain I'll bet it goes over 3 feet by tomorrow.  Flooding here would require something over 9 feet, so there's nothing to worry about for us from this storm.  But wind is always a scare with all the trees around here. So far there hasn't been much wind, but I assume that will change by tomorrow morning.
Posted by Mitchell Langbert at 1:09 AM No comments: