There Needs to Be a Revolution Every 240 Years 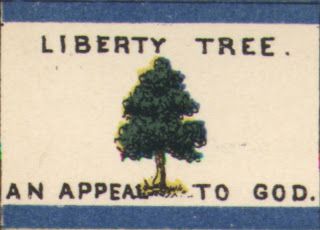 Thomas Jefferson wrote to William Stephens Smith:  "The tree of liberty must be refreshed from time to time with the blood of patriots and tyrants.  It is its natural manure."   He was fond of adding that there needs to be a revolution every 20 years.

The human mind is rarely able to forecast the future with precision.  In the case of the Federalist government instituted at the state constitutional conventions in the 1780s and the national Constitutional Convention, Jefferson overstated the  case by 220 years.

From its beginning the federal government fulfilled the anti-Federalists' fears. It always has subsidized the wealthy and well placed, and it frequently has instituted elements of tyranny that have waxed and waned with popular opinion. In the 1790s the Federalists passed the Alien and Sedition Act, a direct attack on the Bill of Rights upon which the anti-Federalists had insisted.  During the Civil War Lincoln closed Democratic newspapers and attempted to arrest Chief Justice Roger Taney.  After World War I anarchists and socialists were exiled.  During World War II, Japanese-Americans were confined to concentration camps.  In the post-war period the FBI harassed communists.

Those incursions on civil liberties are small compared to the federal incursions on economic liberties that have escalated since the Civil War.  Until the 1920s, America's had been a limited state, a concept little understood before the 18th century.  Popular ideological commitment to liberty and the limited state allowed democracy to coexist with economic stability.

(1) an explosion of innovation,
(2) a rising standard of living for all Americans, especially workers, despite erroneous public belief that living standards were falling,
(3) an opportunity for all Americans to start businesses,
(4) a greater degree of freedom than ever previously known to mankind because economic liberty begets civil liberty.

As well, (5), the American economic and constitutional system overcame the natural flaw of democratic systems, class warfare and self-aggrandizement through special interests' capture of regulatory mechanisms, because of public commitment to the limited state and liberty.  In the 19th century government was less than five percent of the economy; today it is more than 40 percent.

In Rise and Decline of Nations Mancur Olson makes clear why democracy leads to special interest lobbying that imposes high public costs.  It may be that there are periods when the public can say no to special interests' influence on the state, but mass movements are fragile and do not last.  Ultimately, the economy's innovative capacity and living standards decline as special interests extract ever greater shares of wealth through regulation, taxation, and monetary expansion.

The transactions costs of organization and the larger benefit per capita make interests that can be easily organized more effective. This can change over time. For example, the environmental movement has been able to establish special interest groups that have worked in tandem with the United Nations and federal regulatory authorities. Nevertheless, they have done so by forging corporatist alliances.  Without those alliances the current push toward state-enforced, corporatist environmentalism could not have proceeded so far.

The wealthy have always been small in number, have had greater resources, and have been able to communicate among themselves because they have been concentrated in specific geographic areas like New York and Los Angeles.  From the beginning of American history institutions like the central bank and slavery reflected the ability of the wealthy  to divide a large benefit among a relatively small group.

In his Anti-Federalists, Jackson Turner Main shows that the anti-Federalists were poorer and less organized than the Federalists.   Although the Federalists claimed to be in favor of decentralization and federalism (thus their name), once in power they attempted to centralize the state through the First Bank of the United States, a standing army, and the Alien and Sedition Act. As well, the Constitution broadened slavery (compared to the level that would have existed without the Constitution) by making the Fugitive Slave Law possible.

What prevented special interest capture of the economy was public commitment to limited government.  The American government always reflected the interests of the wealthy, but because its scope was limited, the American economy has been the most successful in history. Progressivism, though, discarded the 19th century commitment to the limited state. Progressives like Richard T. Ely viewed expansion of the state as a good in itself; John Dewey saw democracy itself as an ultimate good.  The administrations of Theodore Roosevelt and Woodrow Wilson discarded the limitations on special interest extraction.  In the Progressives' minds they were saving America from trusts, but the ultimate effect has been to allow full sway to the dynamic Mancur Olson describes, so the trusts have expanded.

The result has been that for the past 40 years the American economy has been dismal, and it is getting worse.  As well, the Obama administration has demonstrated that it is capable of worse tyranny that that of Senator Joseph McCarthy, which the American public has so far accepted with indifference.  These include use of state power to financially harass dissenting political organizations, illegal investigation of more than 100 million telephone records, and a cover-up about President Obama's self-destructive decisions with respect to Benghazi.  Hardly a day goes by without evidence of an additional tyrannical initiative at the federal level.

Americans tend to believe that they have a great political and economic system, but that is no longer true.  My ancestors wisely chose emigration from their eastern European homes, and if you are smart, you are thinking of foreign real estate investment.  Enough Americans favor freedom that a revolutionary movement is possible here. After 240 years, the liberty tree needs refreshment.