Warren Buffett Should Stay within His Circle of Competence 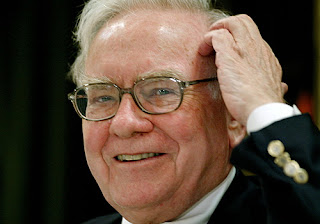 Today's New York Sun notes that while Warren Buffett complains that he is taxed too little on $46 million in income, his actual economic income last year, including unrealized capital gains, was more than $10 billion dollars. The reason is the unrealized appreciation in Berkshire Hathaway stock, which meant more than $10 billion to Buffett this year. I own four "B" shares that have climbed to $3,621 each this year so I have probably made $1,500 in unrealized appreciation. Tip money compared to a billionaire, but bless Buffett's soul.

Those New Yorkers who have managed to survive the New York diaspora (the rest having been driven out by "humane" policies of the kind that Mr. Buffett advocates) hear about the hedge fund billionaires. They are obnoxious, boorish, greedy and, in a phrase, nouveaux riche.

Envy is natural in a free society. Success is sometimes out of proportion. This was true in the 19th century with the success of Standard Oil and John D. Rockefeller, and it was true in the twentieth century with the success of A&P, which was prosecuted for anti-trust and price fixing between the 1930s and 1950s. This also has occurred in the case of the hedge fund managers. But there is a difference. Unlike Standard Oil and A&P, hedge fund managers rely on government to profit and have not been particularly innovative in developing new products or new management methods, as did John D. Rockefeller and A&P's Hartford brothers.

Apologists for hedge fund managers, such as Weekly Standard, claim that private equity and hedge funds improve the management of firms that they buy and then resell. This claim is nonsensical. It is well known that corporate acquistions mostly destroy shareholder value in the long run. If you were to limit your investing to stocks of firms that private equity and hedge fund firms have taken off the market and then made public again my hunch is that you will be spending your retirement holding a tin cup. Mark Sirower's book Synergy Trap explains why outsiders do not make good managers. As well, Hayek noticed that management is primarily a matter of knowledge specific to time and place. Outsiders such as financiers lack specific knowledge. The most famous private equity deal involving Henry Kravis and RJR Nabisco that was immortalized in Barbarians at the Gate ended up a financial embarrassment because KKR held onto it.

Federal corporate welfare has made private equity managers, including Warren Buffett, rich. Corporate welfare takes the form of artificially low interest rates that the Fed has pursued since the 1980s. I have previously blogged that hedge fund managers, such as the Carlyle Group's William E. Conway, are well aware that Keynesian monetary policies that liberal economists and the New York Times advocate have spurred enormous profits for hedge funds and have amounted to a transfer from mainstream America to the financial community. There are other beneficiaries of Keynesian re-distribution, to include corporations, universities, mortgage payers and, of course, Warren Buffett. Those who benefit from low interest rates, which stimulate demand for unproductive investment such as $120,000 to study with Paul Krugman or $800,000 for for a condominium in Bayshore, Long Island naturally favor inflationary policies. These include Buffett, Krugman and hedge fund managers. No wonder Buffett, Gates, etc. are all liberals who support left-wing economic policies.

Buffett's father was a hard-money Republican. When Buffett was a student at Penn, he was photographed riding an elephant. However, the elephant must have smacked him upside his head with his trunk, because Buffett switched to the Democrats. Although Buffett is the greatest investor who ever lived, he lacks competence with respect to policy issues. In investing, Buffett argues that you should only invest in areas in which you have expertise, i.e., are within what he calls your "circle of competence". Perhaps he should take his own advice, and avoid advocating frivolous tax policies.
Posted by Mitchell Langbert at 10:46 AM

Riverside business investment firm is focusing on growth-oriented businesses. It invests alongside management teams and operating executives to sponsor management-led buyouts, recapitalizations and growth financings and which is only focusing on Los Angeles, Riverside and Orange County.